Innovation has shaped us from the beginning.

When Ed Carson became a grandparent in 1993, he wanted something different than handing out cigars to celebrate his granddaughter's birth. Fortunately, Ed spotted a Hershey’s milk chocolate bar and thought to himself "HERE SHE IS."

Equipped with a computer, desktop printer and great imagination, Ed fashioned a pink wrapper proclaiming "HERESHEIS" and placed it around a HERSHEY'S chocolate bar. He included granddaughter Elise's name, weight and date of birth. At the hospital, the nurses loved them so much, Ed needed to print more. Soon after Elise was born, so was a company that would change the party favor landscape forever.

Ed struck a deal with Homestead Inc., the trademark management subsidiary of the Hershey Foods Corporation, to remove any potential conflict over the use of the terms HERESHEIS, HEREHEIS and HERETHEYARE.

Ed fully retired when he sold the company in 2003, and it became known as “WH Candy”.

In 2016, WH Candy was purchased by Steve Mandell, the founder of the Party City retail stores. As an expert in the celebrations business, Steve broadened and expanded the WH Candy business to include more varieties of candy and favors for every special occasion, new personalized favor items, bulk candy for candy buffets and events, gift items, and more. Steve's son Erik Mandell, another innovator and entrepreneur, purchased WH Candy in December of 2020 and continues to expand the company's offerings in candy, favors, and personalized gifts. 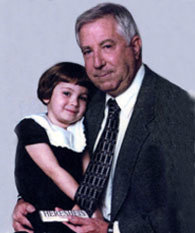 SIGN UP FOR WH CANDY NEWS AND SPECIAL EMAIL ONLY OFFERS

The HERESHEIS®, HEREHEIS® and HERETHEYARE® trademarks, related trade dress & copyrights are used under license from Hershey Chocolate & Confectionery Corporation by RebEll Enterprises, Inc. All HERSHEY'S® products sold on this website are manufactured by The Hershey Company. All HERSHEY'S® trademarks, related trade dress and copyrights are owned by The Hershey Company or its aﬃliate, Hershey Chocolate & Confectionery Corporation, including HERSHEY'S®, MINIATURES™, KISSES®, SPECIAL DARK®, MR. GOODBAR®, KRACKEL® and REESE'S®. There is no corporate aﬃliation between The Hershey Company, Hershey Chocolate & Confectionery Corporation, its divisions or subsidiaries, and RebEll Enterprises, Inc. or RebEll Wrap, LLC, dba WH Candy.